Steve Babaeko is the Chairman of LAIF Management Board. He is also the Managing Director/ Chief Creative Officer of X3M Ideas. In this interview he bares his mind on the industry, organisation, judging and quality of work in 2017 LAIF Awards. Except…

I really wish more people would give me feedback. I am very well opened to feedbacks because I’m looking for what we can improve upon.  I can’t tell you it went like this or that; I can’t be the judge and jury in a case in which I am the accused. However, the feelers suggest we had a great event.

We have a couple of innovation injected into this year’s LAIF awards. One is the venue. We wanted to take it to a befitting venue and we thought Landmark is a world-class venue. If the pictures were to go out to the world on the internet, the optics will be more befitting in view of the ambience and LAIF could pass as the biggest advertising award in West Africa.

Secondly, it’s the jury and its constitution.  To have no less a person than Julia Oku-Jack, who is a veteran creative director and veteran agency entrepreneur. They did a fantastic job in making sure that there will be less argument at the end of the day. Let me also mention the content; we tried to improve on the contents as well. Bringing no less a person than Sir Shina Peters to perform at an award is a big plus. We don’t usually go that far, so we raised the bar.

We have some quite quality work in 2017 LAIF awards. Apart from that, I saw more entries from new and younger agencies and a couple of them actually did very well at the awards.

Unfortunately, Insight did not participate and nobody is sure why they did not participate. The parent company, Publicis Groupe also pulled out of Cannes Advertising Festival for next year. May be, that influenced their decision. Like I said, I can’t hold brief for them. 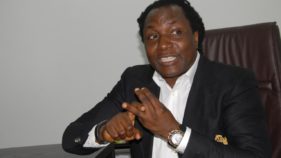 Why we have not been having Grand Prix is when the jury feels there is no work good enough for it and that is the only reason an overall winner is not picked. But we still do the Olympic system in which the agency with the highest number of gold automatically becomes the overall winner.  This year, we have a Grand Prix winner which is Noah’s Ark.

As Chairman of LAIF Management Committee

I was apprehensive for a couple of reasons.  This year is bad in terms of the economy, so we did not get the kind of support we usually get from clients. That Insight did not participate, also led to loss of revenue automatically from the entries point of view. There were many challenges. However, I worked with a very solid team.

For the first time, we included people from OAAN, MIPAN, EXMAN, who joined us in the team, so we didn’t do it alone. Other stakeholders were involved and that really helped us considerably to be able to surmount the challenges. Personally, my habit is to give my all to surmount challenges. I took it as a big challenge and tried to succeed by all means. The people I worked with were outstanding.  The secretariat team was excellent this year. All the team needed were leadership and motivation.

Some of the challenges we were able to fix because we had a checklist and we adhered to timelines. The brochure was ready two days before the event and the plaques arrived well labelled in good time. That’s why you saw less of the errors you normally find in previous editions.

We brought in a top team mostly made up of people from 7even Interactive. The ads for the award itself ended up as ads-of-the-world choice, which was like you do a campaign for an award and the ads ended up giving you recognition. It was a lot of efforts from different people. Many people supported us as members of various boards and sub-committees in AAAN. This was the first time I saw LAIF’s management board members not missing meetings; they were there on time and contributed robustly. It was all about people; people made it happened.

Members were passionate about it. I was able to drive the passion to inspire them, ostensibly, for them to see that this was necessary for our industry.

Extending LAIF To Other Climes

I promised you if it’s the last thing I can do, it is going to happen next year. We are starting from West Africa. Even if only two countries from the sub-region join us for the awards next year, it’s going to happen. We are going to start driving it early. From now on, we are building the website and we are going digital. The entries will be digital; you submit online, we collate online. We can do pre-judging even before we have the jury sitting. It is going to be innovation-led.

It was the theme for the AAAN’s annual general meeting this year. “Fresh thinking” is very germane for the industry at this point in time. So, we felt instead of looking for another theme, we should adopt it in order to improve conversation about the way we do things. We cannot keep doing the same thing and expect a new result. The fact that for the first time, a woman was the head of the jury, for me, that was fresh thinking. You can see the quality of thought leadership she brought to bear on the award jury and how that impacted on the award in general.

This is the 12th edition. For me, it’s fantastic. We don’t have many institutions that have existed for 12 years in the country, but LAIF has been consistent over the years. The various AAAN presidents since the inception of the award and all chairmen of the LAIF Management Board have been pushing the frontiers, thereby, adding value to the brand.

Secret Behind Success Of 2017 LAIF Awards

I think it is credibility and just to help mend the seemingly broken fences such as people not feeling happy about results. That’s why we brought in top quality jury. You can’t tell Mrs. Julia Oku-Jack what to do. She cherishes her integrity and reputation, likewise, others on the jury. What we are doing forward is that there would be a 50/50 split between the veterans and the hands-on professionals, so we can have a more robust judging process going forward.

I believe we are getting closer to Cannes. If you do sloppy judging, you will get sloppy results and people will start saying you won, meanwhile what you won cannot really stand the heat at other awards. Like I said at the event, three international major awards were won by Nigerian agencies this year. The Epica Gold was won by Noah’s Ark this year, X3M Ideas won the Cristal Gold and 7even Interactive won Loeries. It has never happened before. This means that we are getting better at it by the day. This year, many Nigerians were appointed judges even at international awards. Bolaji Alausa of Noah’s Ark and myself were at Loeries, I’m going back to New York Advertising Festival as a member of the jury together with a couple of young Nigerians from  Noah’s Ark and  7even Interactive, who are also on the jury. I think we are moving in the right direction; it’s just to keep driving the passion, keep doing quality works and certainly, it’ll happen.

This year was a tough year for advertising but then this is part of the game. I don’t think it’s so high; you pay far higher for some of these international awards. I’m really happy to see some of these young agencies came out, contested and won. It made me happy; it shows there is hope for the industry.

Assessment Of Business In 2017

It’s been a painful journey throughout this year. The advertising industry is not immune to the economic reversal going on in the country. Thankfully, the oil price is going up now. The dwindling oil revenue occasioned by the price slash and producing below capacity starting from 2016 still affects the economy. If we get the budget passed on time by the House of Representatives and the Senate and the executive assent to it, we would begin to see some positive changes in the economy. For now, between the lawmakers and executive arm, there is buck passing and foot-dragging over the budget, but honestly, we need the budget done and treated on time.

Impact Of 2019 Political Campaign And The World Cup

Definitely, that’s going to help because the World Cup is a very major event. Some of our clients will participate, which is good for the industry as spending is expected to pick up. Same with politics, the race for 2019 basically starts now.  You will see more smart politicians engage the services of professional agencies. They won’t give their political communication or advertising campaigns to their sisters-in-law to do. If they really want to get good outcome, they need to invest in quality campaign. In that wise, we should expect a boost in the industry.

We would be happy to see that these moribund agencies because come back to business. Honestly, if more agencies are able to do good business and they could pay their dues and support the secretariat, the AAAN and the entire industry would be better for it.