A testament to the value of a design and the messages it has the potential to carry can be found in no farther a period than a few months ago when the Nigeria Super Eagles’ jersey became an international sensation. The Nike design was voted the best at the recently concluded World Cup in Russia as it showcased the ‘youthful exuberance, pride and infectious palpable charisma’ of the new generation . Its vibrant colors has its inspiration from the traditional ‘Ankara’ and the design itself echoes the World Cup of ‘94. With this still fresh in the memories of Nigerians, Nigeria Air provided another platform to showcase this cultural wealth and exuberance to the world.

The national carrier is expected to travel over 80 countries across the globe and the design of its identity had the potential of being  a canvas showcasing Nigeria and announcing her creativity to the global audience. While the whole idea of reviving such a cog of the aviation sector has been lauded by the citizens, and rightfully so, the identity design of the national carrier still fails to inspire enthusiasm and command the attention a mammoth project like this one is supposed to. Why?

The Name:
In a sector dominated by privately owned airlines, Nigeria Air should be a breath of fresh air. Yet, the name suggests a modicum of mediocrity, a name that doesn’t possess the friendliness or catchiness that, say ‘Air Nigeria’, would have offered. It might have been chosen in respect to ‘Nigeria Airways’, the first project of its kind, but it shows a lack of respect for the new age and the creative identity that is expected to form a basis of any design that represents ‘Naija’. Maybe ‘Nigeria Air’ was chosen in a bid to promote a simplistic ideal but the culture and heritage of Nigeria is not a simple one. Nigeria is rooted in her principles of diversity- in culture, thoughts, language, and ways. The identity of a project that hails from a culture of such depth should be reflective of the peoples it represents.

Nigeria Air would need to be repeated more than once for a new audience to grasp what it represents. Nigeria Air would be misconstrued for ‘Nigerian Air’ or ‘Nigeria’s Air’ down the road.  ‘Nigeria Air’ is not a name that would effectively represent the colloquial and increasingly popular ‘Naija’ age.

Most press publications has referred to the logo as a swirling ribbon in the green and white of Nigeria, however, the logo is actually an eagle with the swirling flag as its wing. The right side sees the flag curl slightly at the end representing a claw. The elaborately swiveling shape is actually a subtle depiction of The Eagle in descent- ‘A’ for creativity. However, it is not news that the logo design of any brand is basically the whole idea and concept, mission, and vision of that brand, coalesced into representative icons. The logo for ‘Nigeria Air’ looks lazy, incapable of handling the cultures it represents. There is a childishness in the cartoonish look it portrays and an overwhelming cliché in simply opting for the Eagle and the Flag, a natural mascot of Nigeria Aviation. A lack of originality is a basic flaw of this design. The design also lacks balance and seems to be all over the place, a ribbon just thrown across a white canvas.

However, of even bigger concern is the distortion of the flag. The flag is supposed to be three vertical bands of green white and green colours, however, the logo turns the flag on its head to present to us, a horizontal representation of a flag that was originally designed in a vertical form since 1959. If Germany were to do this same thing, they’ll basically be flying the flag of Belgium!

The Tagline
‘‘Bringing Nigeria Closer to the World’  is what Nigeria Air aims to achieve. Nigeria Airways is touted as a ‘social service’, a project that looks to be customer oriented. However, the tagline sounds like a political project that would be used to promote Nigeria- the state. The airline takes a tagline that lacks a personal connection to the people its created to serve. This is even more poignant when viewed in comparism to Nigeria Airways tagline ‘’…come up where the living’s beautiful‘’.

What is Nigeria’s Identity?
The promotional campaign for Nigeria Air takes the tone of representing Nigeria and Nigerians. It promises a proper depiction of the rich cultural diversity of the nation and her people. This begs the question of what exactly the identity of the state is. The use of varying shades of green in the application of the identity shows a lack of a commissioned identity for the nation’s colors. The font that is used to represent ‘Nigeria Air’ is less than palpable and the flaws in the identity of the national carrier stems from the nation’s lack of an identity in itself. A thorough development of a national identity will easily translate into any brand that is made in her name.

A Dynamic Identity system would have been a more appropriate direction in the planes’ design. A model is British Airways ‘World Images’ livery designs launched in1995. A selection of the nearly 50 different tailfin designs that were commissioned as part of the “World Images” project. A fleet like that provides a space for diverse representation of the cultural values and thoughts of the Nigerian peoples. This dynamism would be represented in pallets, in colors and motifs. It would be a testament to the rich cultural essence of the newly emergent generation of the Nigerian populace. Also, it would be a showcase of an heritage that is making a return from the obscurity that Western values and thoughts has condemned it. We suggest an identity that Nigerians identify with; an expression of pro-Africanism. 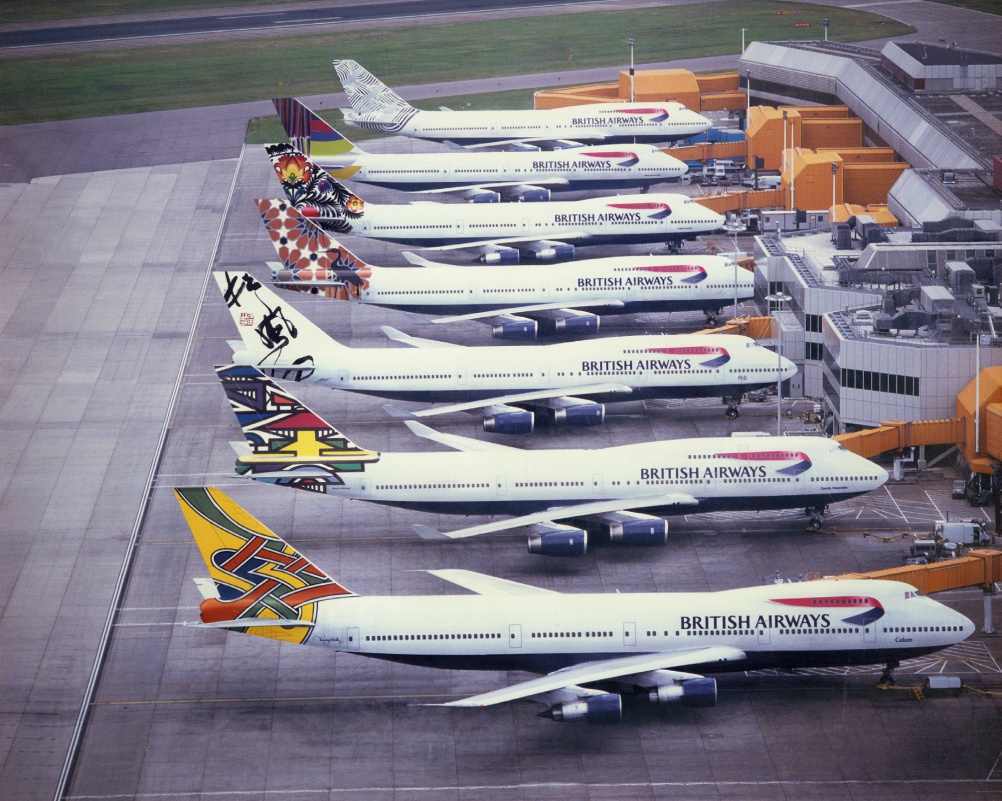 The development that the Nigeria Air initiative promises is thoroughly laudable, however, the national carrier should be seen as a representation of Nigeria in all the different countries it would be taking off from and landing in.  The identity should preach the creativity that is becoming synonymous with the new Nigeria. The Identity of Nigeria Air is not bad, but it is underwhelming. It does not offer a compact and concise chronicle of the vibrant and diverse culture that Nigeria and Africa boasts. While building a Nigeria that would fly, it should be given an identity that can keep up.

‘Nigeria @ 60’ Logo: Beyond Controversy, A Plus For Nigerian IMC